Right to Equality : Article 14 of the Indian Constitution 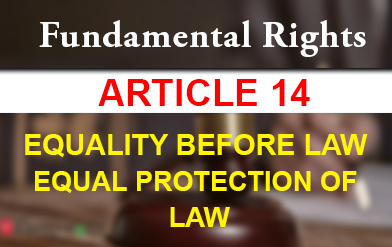 Under Article 14 two most  important aspects have been included which are equality before the law and the equal protection of the law and both of them play an important part of a basic human rights. Under Article 14 the concept of Rule of law has been adopted under which no person can be said to be above the law and every person has to abide by the provisions of law. But the equality which has been provided for under  Article 14 is not universal and the principle of equality among the equals is followed. This is the reason why many laws are made by some people such as laws for the benefit of children. Such classification is reasonable and not arbitrary.

The new aspect of Article 14 has been curtail by the judiciary and the main purpose of Article 14 is to remove any arbitrariness which may exist in the actions of the State and thus this Article has a much wider scope in the current time as compared to its scope at the time of establishment of the Constitution. Thus, the scope of this article has been extended by various judicial pronouncements.

The New Concept of Equality

In the case of Air India v. Nargesh Meerza, the regulation provided by the Indian Airlines is that an Air Hostess had to retire from their services on attaining the age of 35 or if they married within four years of the said service or on their first pregnancy whatever occurred earlier. The court held that refusing the services of an air hostess on the basis of pregnancy amounted to total discrimination as it was an contrary ground for termination. The regulations provided that after four years of service the air hostess can marry and the grounds of pregnancy was not reasonable. Thus, it was held that this condition violated Article 14 of the indian constitution and such termination would not be valid and the court has directed that the putting up any condition like that of marriage or of pregnancy is volatile of article 14 of the indian constitution and the decision need to be arbitrary on the ground of selfness and the determination of the upholding the decision thereof.

Similarly in the case of D.S. Nakara v. Union of India, Rule 34 of the Central Services rules,1950 was held to be violative of  Article 14 and thus it was unconstitutional. Under this rule, a categorization was made between the pensioners who retired on or before a specific date and those who retired after the said date. Such classification was held unreasonable by the Court and it was arbitrary. Thus it was an infringement of Article 14 and as a result, was set aside.

In the case of Bachan Singh v. State of Punjab, explaining the new aspect of Article 14, Justice PN Bhagwati had observed that Rule of law perfuse the entire fabric of the Indian Constitution and it excludes arbitrariness. According to him, whenever there is arbitrariness, there is a denial of the Rule of Law. So, each and every action of the State should be free from arbitrariness otherwise the Court will have to declare the act as unconstitutional.

A five-judge Bench of the Supreme Court without exception struck down Section 377 of the Indian Penal Code, to the extent that it criminalized same-sex relations between consenting adults. LGBT community individuals are now legally allowed to engage in consensual intercourse. The said segment of Section 377 of IPC was held to be violative of right to equality which equally applies to same sex couples.

A five-judge Bench by majority struck down Section 497 of the Indian Penal Code (IPC), thereby decriminalizing adultery. It struck down Section 497 of Indian Penal Code on the grounds that it violates Articles 14, 15 and 21 of the Constitution. The Bench held that the section is an outmoded and paternalistic law, which infringes upon a woman’s individualism and dignity. The Bench also explained Section 198 of the Code of Criminal Procedure Code (CrPC). 198(2) CrPC that specifies only a husband can file charges for the offences under Section 497 IPC . So over the years, the various courts of the country have been shaping the jurisprudence of Article 14 of the Constitution of India. The scope of the new concept of Article 14 is much greater than the principle of reasonable classification. It guarantees any kind of non arbitrariness which may exist in the actions of the State and the classification is merely a subsidiary to this Article. Article 14 on the other side deal with the fundamental right to life and to live a dignified life

A Constitutional bench of the Supreme Court , headed by CJI Dipak Misra,struck off the age-old ban on entry of women between the ages of 10-50, inside the Sabrimala temple where the people worshipped  Lord Ayyappa . The long-awaited judgement was upheld despite the protests of hundreds of people in the state of Kerala. Devotion(worship) and faith must not be subjected to gender discrimination, as dierected by the honourable judges of India.The restriction on entry was a violation of the right to worship of women, as assured by Article 14 and 25 of the Constitution. This decision elaborates gender justice and equality in the most remarkable manner.

The instant proceedings come to light after a 3-Judge Bench in India Young Lawyers Assn. v. State of Kerala, (2017) 10 SCC 689, keeping in view the complexity of issues involved and  referred the matter for consideration by a Constitutional bench. The writ petition present under article 32 of the Indian Constitution seek issue of directions against the Government of Kerala and other respondents related  to ensure entry of female follower between the age group of 10 to 50 years to the Lord Ayyappa Temple at Sabarimala (Kerala) which has been denied to them on the basis of certain custom and usage; to declare Rule 3 (b) of the Kerala Hindu Places of Public Worship (Authorisation of Entry) Rules, 1965 as unconstitutional being violative of Articles 14, 15, 25 and 51 A(e) of the Constitution and they further passed  directions for the safety of women devotees. On the other hand, according to the respondents, the said temple is open to all members of the public irrespective of caste, creed, or religion, is a denominational temple which holds the fundamental right to manage its own matters and concerns relating to religion.

During the judgement of the case, there are  few question which has emerged to which one of them is Whether by the entry of women aged 10-50 year to enter the sabrimala temple which is based upon custom allegedly constituting an essential part of religion, can be said to be violative of their rights under Article 25?

Discussion in relation to right under Article 25(1)

The right to practise religion under Article 25(1), in its broad contour which  encompasses a non-discriminatory right which is equally available to everyone irrespective of gender(male/female) of all age groups professing the same religion. Article 25(1), by employing the expression “all persons”, demonstrates that the freedom of value principle and the right to freely profess, practise and propagate any religion which is available, though subject to the restrictions described in Article 25(1) itself, to every person including women. Women of any age group have the right as much as men to visit and enter a temple practising Hindu religion  by his/ her own choice and to exhibit her respect and devotion towards Lord Ayyappa. The term “morality” which takes place in Article 25(1) of the Constitution cannot be viewed with a narrow lens so as to discuss the definition of morality to what an individual, a section or religious sect may assess the term to mean. The notions as of the public order, morality and health cannot be used as a fancy device to restrict the freedom to freely practise religion and discrimination  against women of the age group of 10 to 50 years by refusing them their legal right to enter the sabrimala temple and offer their prayers for the simple reason that public morality must yield to constitutional morality.

So basically in the end we clearly understand that Article 14 of the Indian constitution is the basic structure of the constitution and nobody can infringed their right and duties which is violative of Article 14.