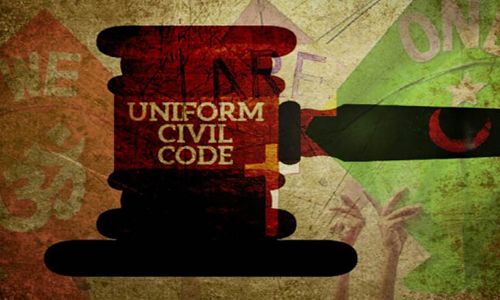 A Uniform Civil Code involves having a common set of laws governing marriage, divorce, succession and adoption for all Indians, instead of application of different personal laws for people of different religions. Uniform civil code in simple words is one nation, one legislation.It is basically to have a set of secular law for all religion in the matters of personal law i.e divorce marriage adoption inheritance guardianship etc. A Uniform Civil Code  for India is one of the political articles of faith for the BJP and was part of its 2019 election manifesto. The need for one has been argued on the grounds that it will promote uniformity and unity in India and now a Delhi High Court justice has also exhorted the Centre to bring in a Uniform Civil Code, saying young generation of India “ought not to be forced to struggle with issues arising due to conflicts in various personal laws, especially in relation to marriage and divorce”. Matters like marriage, inheritance, adoption, succession, etc. are governed in India according to the personal laws of the various religious communities. That is, Hindus have their own marriage laws and Muslim marriages are governed by their own personal laws. The same is the case with Parsi and Christians who, too, have their own separate personal laws governing these matters.But separate laws for the different communities has for long been seen as contributing to legal and administrative complexities and, as the Delhi HC noted, creates grounds for “issues arising due to conflicts in various personal laws”.

The founding fathers of the India has closely detailed analysis of these issues and, although they did not away with the different personal laws that had been introduced by the British when they made the codified laws for India, they instituted an article in the chapter on Directive Principles of State Policy that makes up Part IV of the Constitution of India. Article 44 says that the “State shall endeavour to secure for the citizens a uniform civil code throughout the territory of India”. However, its presence in the said section means that Article 44 is not compulsory and it is up to the centre and Parliament to make a law to bring in Uniform civil Code in the country. That is because Article 37 says that the “provisions contained in this Part (Part IV) shall not be enforceable by any court… and it shall be the duty of the State to apply these principles in making laws”.The Uniform Civil Code aims to provide protection to vulnerable sections as envisaged by Ambedkar including women and religious minorities, while also promoting nationalistic eagerness through unity. When this code was enacted the aim was to simplify laws that are segregated at present on the basis of religion like the Hindu code bill, Shariat law, and others. The code will segregate to  the complex laws around marriage ceremonies, inheritance, succession, adoptions making them one for all.  The same civil law will then be applicable to all citizens irrespective of their faith. Hence we can say that the uniform civil code is a way of relief regarding the matter relating to inheritance, marriage divorce, adoption and others where one can have uniform laws for all the  religions.

The popular Shah Bano case has demanded for the uniform civil code because In the Shah Bano case, the apex court had said that a common civil code would help the cause of national integration by removing disparate loyalties to laws having conflicting ideologies. It had also observed that the State was charged with the duty of protecting Uniform Civil Code for the citizens of the country. It was also claimed by CJI Chandchurd that it is a step forward towards uniform civil code. A common civil code will help the clause of national integration by removing loyalties to law which have conflicting ideologies.

The major problem revolving around Uniform Civil Code has been secularism and the freedom of religion guaranteed under the Constitution of India. The preamble of the Constitution states that India is a secular democratic republic. This means that there is no State religion. A secular State shall not discriminate between anyone on the basis of religion. A State is only concerned with the relation between man and man clearly not with the relation of man with God. It does not mean allowing all religions to be practiced. It means that religion should not interfere with the  life of an individual.

In S.R. Bommai v. Union of India, as per Justice Jeevan Reddy, it was held that religion is the matter of individual faith and cannot be mixed with secular activities. So that the Secular activities can be regulated by the State by enacting a law.

In India, there exists a concept of positive secularism as distinguished from the doctrine of secularism accepted by America and some European states i.e. there is a wall of separation between religion and State. In India, positive secularism separates spiritualism with individual faith. The reason is that America and the European countries went through the stages of renaissance, reformation and enlightenment and thus they can enact a law stating that the State shall not interfere with religion. On the contrary, India has not gone through these stages and thus the responsibility lies on the State to interfere in the matters of religion so as to remove the impediments in the governance of the State.

Articles 25 and 26  that guarantee the right to freedom of religion. Article 25 guarantees that every person has the freedom of conscience and the right to practice and propagate and profess the religion. But this right is subject to morality, public order and health. These provisions are presented under Part III of the Constitution. Article 25 shall also empower the State to regulate or restrict any kind of economic, financial, political or other secular activity, which may be connected with religious practice and also to provide for social welfare and reforms. The protection of Articles 25 and 26 is not only limited to proceeding with the doctrine of belief. It elaborates on acts done in conduct of religion and, therefore, contains a guarantee for ritual and observations, ceremonies and modes of worship, which are the integral parts of religion.

Uniform Civil Code is not opposed to secularism or will not violate Article 25 and 26. Article 44 is based on the concept that there is no need for a connection between religion and personal law in a common law society. Marriage, succession and like matters are of religious (secular)  nature and, therefore, law can regulate them. No religion permits deliberate misinformation about anything. The Uniform Civil Code will not and shall not result in interference of one’s religious beliefs relating, mainly to maintenance, succession and inheritance. This in totality  means that under the Uniform Civil Code a Hindu will not be forced to perform a nikah or a Muslim will not be forced to carry out rituals of any other religion. But in matters of inheritance, right to property, maintenance and succession, there will be a common law.

In the year 2003 there was a leading case of Vallapattam v/s UOI (2003) ,in this case it was held that Article 44 no way infringes the freedom of religion articulated by Article 25 which specifically saves secular activities associated with the religious practice from the guarantee of religious freedom contained in clause(1) of Article 25 of the constitution of india.

In the case of Satya Prakash Meena v/s Alka Meena it was held that “The Delhi High Court on Wednesday underscored the growing necessity to have in place a Uniform Civil Code for the country in view of the rapid transformation of Indian society with the gradual dissipation of traditional barriers of religion, community and caste.” Only Goa is the state in India which follows the principle of uniform civil code applicable to all the people of every religion. Justice S A Bobde has quoted that  “Goa has what Constitutional framers envisaged for India – a Uniform Civil Code. And I have had the great opportunity of managing justice under that Code. It applies all over in cases related to marriage and succession, governing all people of Goa irrespective of religious association”, said the outgoing Chief Justice of India SA Bobde at a function in Goa, with the incoming CJI and the Law Minister in attendance. Goa has adopted the porteguse law ad all the religion that is hindu muslim sikh chirstian parsis all will be covered under a uniform law . But according to few law commission officers it has been said that neither it is necessary nor it is desirable to implement uniform civil code at this stage as it will create chaos and unwanted attention of the society.The Law Commission of India has also said that a Uniform Civil Code (UCC) is not required to reconcile conflicts in personal laws with the Indian Constitution.